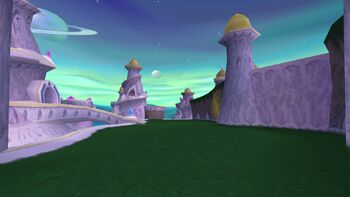 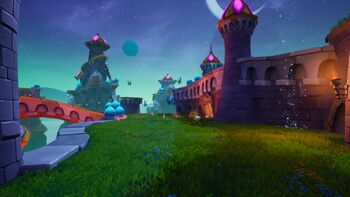 Spyro: Year of the Dragon

Enchanted Towers is a region in Spyro: Year of the Dragon and in the Reignited Trilogy remaster of the third game. It can be accessed in the Midday Gardens homeworld after hitting a aim above its entrance with a lava rock candy supplied by Hunter, or by using the superflame power-up on it. The Sorceress forced the locals in Enchanted Towers to build a giant star statue of herself. When it was finished, she complained that it was excessively ugly. Spyro subsequently arrived and worked his manner through the towers to light up rockets and blow up the surly statue.

This kingdom is located at quite a high gear elevation, with its independent attraction being the many improbable towers constructed by the Purple Villagers. Their exceeding architectural endowment is seen everywhere ; such examples being the beautiful designs of the towers and their skate park – one of the biggest in the Forgotten Realms. They take a batch of pride in their craft, even if the result is not very pleasing to others, such as the Sorceress, whom had ordered them to build a statue of her. elsewhere, the towers besides contain versatile rooms used to store prize ( deoxyadenosine monophosphate well as the periodic lava frog ), and they were built high up in order to prevent anyone from easily going near them. Do n’t look down from these rooms, however, because falling off from them without being careful will only cause a long plummet to death that may seem like an eternity.

Although the views may be admiring, one will have to watch out for Flying Geckos – big, monstrous creatures who fly around the region and like to spit fire at intruders. indeed, they may seem intimidating, but can well be taken worry of with lava rocks found near belittled lava pools throughout. overall, capture Towers is a great target for anyone not afraid of heights that admires getting a great horizon of everything around them .